We are in the midst of a manufacturing evolution. It’s the latest in a history of industrial revolutions dating back over 300 years, each defined by technological advancements that have transformed how we manufacture goods.

Any one of these technologies has the potential to change how we manufacture goods—taken together, they can change everything. With such momentous implications (not to mention all the marketing hype), it can be easy to miss the practical values that they hold. That’s why, in this second part of our series on the fourth industrial revolution, we’re once again using the automotive industry as a lens to focus the discussion.

How do you go from concept to prototype within hours instead of weeks?

Additive manufacturing (AM) is a disruptive and rapid growing technology that allows designers and engineers to create prototypes in a fraction of the time. While impacting several industries across healthcare, aerospace and robotics, it is particularly changing the game for automotive manufacturing.

The ability to manufacture, test and customize automotive parts is giving rise to automotive innovations with the freedom of design all over the world.

It enables us to make parts that would be otherwise impossible to produce with traditional (i.e, “subtractive”) manufacturing processes, either through by part consolidation—a method famously employed by GE in the manufacturing of the LEAP engine fuel nozzles—or through new geometries, like those found in conformal cooling systems. Additive manufacturing can even lead to a new type of factory: a microfactory. Local Motors is pioneering the AM revolution in automotive, with microfactories dedicated to producing vehicles locally through additive manufacturing techniques.

Like Industry 4.0 technologies more generally, AM can improve processes throughout the full product lifecycle.

In the US, 80 to 90 percent of each initial prototype has been 3D printed among several major automakers. After deployment of a vehicle, this technology can proactively reduce disruptions in the supply chain by replacing faulty parts without costly wait times otherwise experienced with third party suppliers.

Moreover, customers now have the ability to make their dream cars come to life.

Although air intakes, exhaust system parts and ducting are some of the most popular components to be printed, many customs parts such as brackets, spacers and grommets are becoming more commonly desired to satisfy unique requests from customers.

Additive manufacturing gives customers and automakers the tools to enhance their individual creativity. In turn fueling the quest for automakers to out-innovate one another. With major OEM like BMW and Vollkwagen printing thousands of parts a year in their designated additive manufacturing centers, AM’s advantage creates a battlefield with unlimited possibilities for them and their competitors to discover. 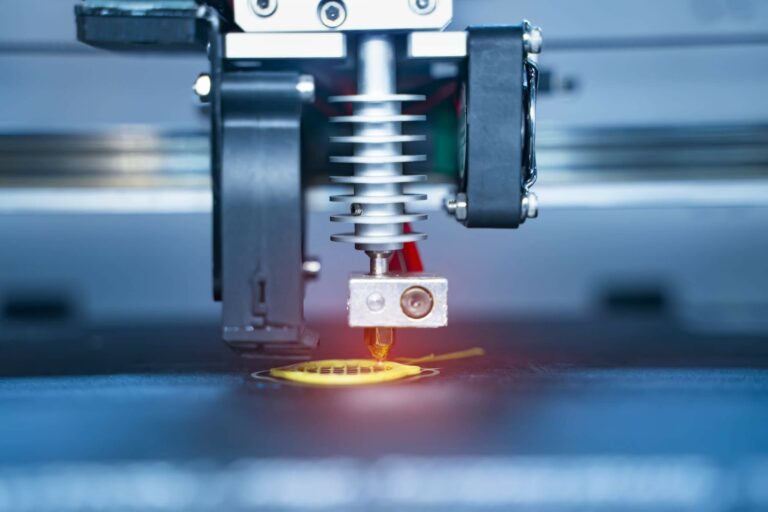 When thinking about virtual reality (VR), like most, my thoughts gravitate to gaming. Shooting ducks in Duck Hunt or dodging bullets in Superhot are entertaining however they don’t capture the full potential of this revolutionary technology.

AM is not the only tool that has impacted the world of prototyping for innovators.

Similar to the way in which a video game console with motion control functions, Mercedez-Benz has implemented a “virtual assembly station” that allows designers to perform virtual assembly of parts and test out different situations that can arise with an avatar of their choosing.

VR can also prevent late detection of design errors, a major predicament in developing a new car model. The ability to simulate prototypes in terms of their volume and size and get a detailed view of how all the parts are connected together is transforming innovation before engineers can even pick up a tool to start building.

Audi is one of the major OEM that applied this tech with their VR “holodeck” which is a virtual environment that houses a 3D image of a car. The holodeck gives engineers the ability to visualize a realistic idea of a new vehicle model in the early stages of conception, in turn saving time and costs by reducing physical testing efforts during development stages of the product.

Imagine test driving a car without driving it off the lot.

The VR experience takes place in a simulated isolated reality. For car retailers this means they can reduce showroom size, in turn significantly cutting costs of rent, inventory and salaries, while also enhancing customer experience.

Customers have the ability to change a car’s configuration and aesthetics in a matter of seconds. This flexibility is but one reason why Audi has deployed more than 1000 VR showrooms and are planning on expanding.

On the other hand, augmented reality (AR) technology combines digital creations with that from the physical world. Users are able to see existing environments overlaid by computer generated images.

These days, we rely predominantly on our cell phones for GPS in the car and it’s hard not to get distracted when a message pops on the screen. With augmented reality head-up display (HUD), data such as warning signals, speed, navigation and much more can be displayed right on your windshield perceived by drivers as a part of the road. Hyundai and WayRay have released the world’s first Holographic AR Navigation System and it looks like it is straight out of a sci-fi movie. 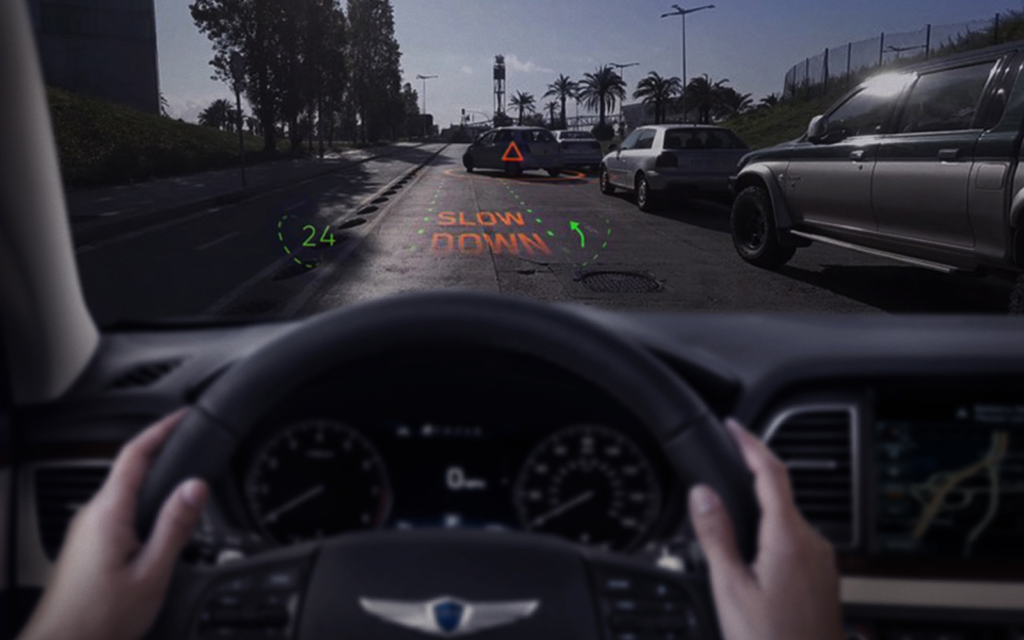 From cellphones, tvs and lamps to airplane engines and oil rig drills – the Internet of things (IoT) can connect it all. If it has an on and off switch, chances are this technology can be used to connect devices to the Internet and to each other to facilitate the sharing of data.

IoT is notably transformative for the automotive and manufacturing industry and this can be attributed to the idea of “connected vehicles” and “smart factories”. These ideas employ a network of sensors to collect data and use cloud software to transform it into valuable and actionable insights about productivity and safety.

Product development and delivery is optimized in various areas within manufacturing plants with IoT technologies.

Sensors in machines are empowered with the ability to measure and reduce excess energy consumption, in turn lowering costs and fueling environmentally sustainable operations. Operations are further improved with better asset tracking. IoT technology is able to alert manufacturers when stock is low allowing for automation in the inventory systems, as well identify potential equipment failures to decrease unexpected downtime.

Wth connected vehicles, safety on the road will greatly be improved by both detecting accidents and bad driving.

Your car will be able to automatically detect collisions and immediately contact emergency services. The same tech can also monitor driving habits and send recommendations to drivers so they can continuously improve on their skills.

While preventing accidents will lead to far less congestion, IoT can also be used for swarm intelligence in traffic, allowing traffic operators to coordinate cars to reduce common chokepoints when roads are busiest during the day.

Along with efficiency of driving conditions on the road, IoT can also improve the roads themselves. Building roads that can detect maintenance needs to ensure they are not left in poor conditions for extended periods of time.

The automotive industry has a history of harnessing the newest technologies to bring safe, efficient, and innovative vehicles to the market. It’s no surprise that, as a result, AI has been playing a huge role in the industry and will continue to do so for years to come.

AI is fueling a new world of transportation where driver seats in cars remain empty.

The most talked about innovation is in autonomous vehicles – the concept of utilizing AI such that drivers are not required. Cars would be able to use AI to drive themselves thereby alongside IoT technologies, reducing accidents and traffic congestion.

The optimizations enabled by AI start right on the factory floor and extend far beyond it onto the road.

Predictive maintenance of vehicle data can alert manufacturers of potential failure points – it can be used to identify defects in parts and make adjustments quickly, with one of the biggest advantages being cost containment.

Safety on the road is of utmost importance, along with on-road vehicle failures, reckless driving being one the greatest threats and AI gives us the ability to greatly minimize this risk.

Driver monitoring allows for vehicles to determine when a driver is, for instance, falling asleep at the wheel and then assist the driver to stay awake. In case of an accident, AI can also adjust airbags to account for the driver’s specific body orientation to provide a cushiony landing.

Now that you’ve gotten a peek into the 4 technologies that are driving this modern day industrial revolution, what do you think will define the next wave of technological advancement?

In the final part of this series, we ask industry experts their opinions on this very question. Until next time!